For the last few weeks I have been working on a replacement application to the one provided by Logitech with their Alert security cameras. The reason being speed and features. I previously touched on the shortcomings of the Logitech software however to reiterate the bulk of it lies in a yearly subscription just to view your own videos using your personal internet connection.

The app at this point is complete and is undergoing minor cosmetic changes both visually and under-the-hood. I intended to release the code today for anyone who hopes to use it however I decided it is far to complex in its current state to be deployed in various environments so I plan on cleaning it up further before release. 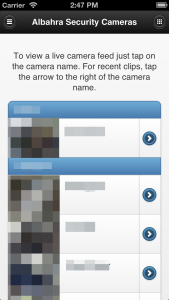 Screenshot 1: This image is the home page which lists all the sites (blue divider) and cameras. The cameras automatically load a current capture thumbnail to the left of the camera name. Tapping the camera name at this screen will launch the live viewer popup and will automatically begin playing the video as soon as a segment is loaded. The live viewer supports pausing, rewinding, and subsequently fast forwarding to the current live position. 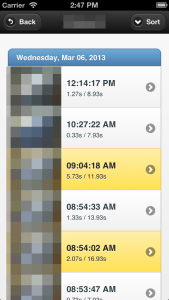 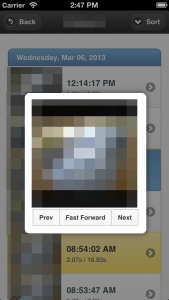 Screenshot 2 and 3: The video history page (last 60 clips) is opened by clicking the arrow to the right of each camera name. This shows all the recordings from the cameras as well as duration of the video, duration of action in the video, and time the video was taken. If the action is greater then 2 seconds then the video is highlighted yellow. The thumbnails do not load until the video is in view, saving bandwidth. Notice the custom play controls underneath the video. The fast forward is a “hack” that allows fast forwarding even though iOS does not support it. 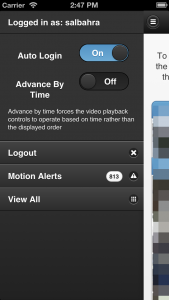 Screenshot 4: The app has full gesture support and allows the user to swipe between pages. Here the main panel is open revealing some basic information about the logged in user and some links to various actions within the app. 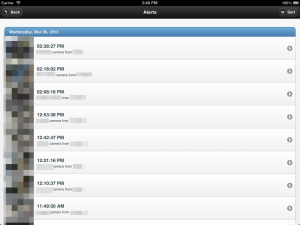 Screenshot 5: One of the options from the main panel above are motion alerts. The application intercepts email alerts from the security cameras and displays them for the user here. If you click an alert the video from which the image was taken will play. 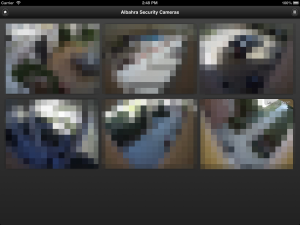 Screenshot 6: The app also supports viewing all cameras from all sites at the same time. This is accessed by swiping to the left from the homepage or by pushing the top right button on the homepage. The video here is loaded using MJPG source since iOS does not allow Quicktime videos simultaneous playing. I left the last pictures top right corner un-blurred to show how the videos are rendered with their name.

Hopefully, I will be able to release this soon in an easy to use package.

I have been working on my OpenSprinkler mobile web application and decided to port the new installer I developed over to my Facebook application. This allows an easier deployment of the web app. I also Read more…

I recently purchased an OpenSprinkler from Ray’s Hobby and am very impressed thus far! The device has accomplished its primary task of moving the controls away from a central box in the garage to any Read more…

Configuring WCCPv2 with a Dynamic IP

Setting up squid on Debian is fairly straight forward and my previous post explored that topic in depth. This time I want to share how I configured squid to communicate with my ASA 5505 which Read more…